In this digital age fashion has become super accessible with livefeed catwalk shows and instant interactions on Twitter and Instagram, so for those of us who weren’t lucky enough to be invited to the amazing designer catwalk shows of London Fashion Week, we can still catch all the action and have a live front row seat just with the added benefit of being cosy in our pjs with a cuppa in our hand and that’s exactly what I was doing this last week. The shows were incredible and I fell in love with so many beautiful designs so here are my highlights from LFW. 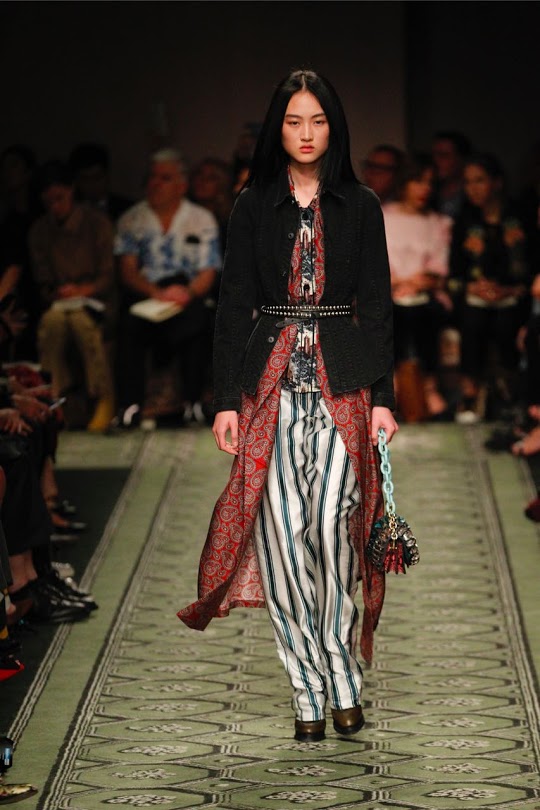 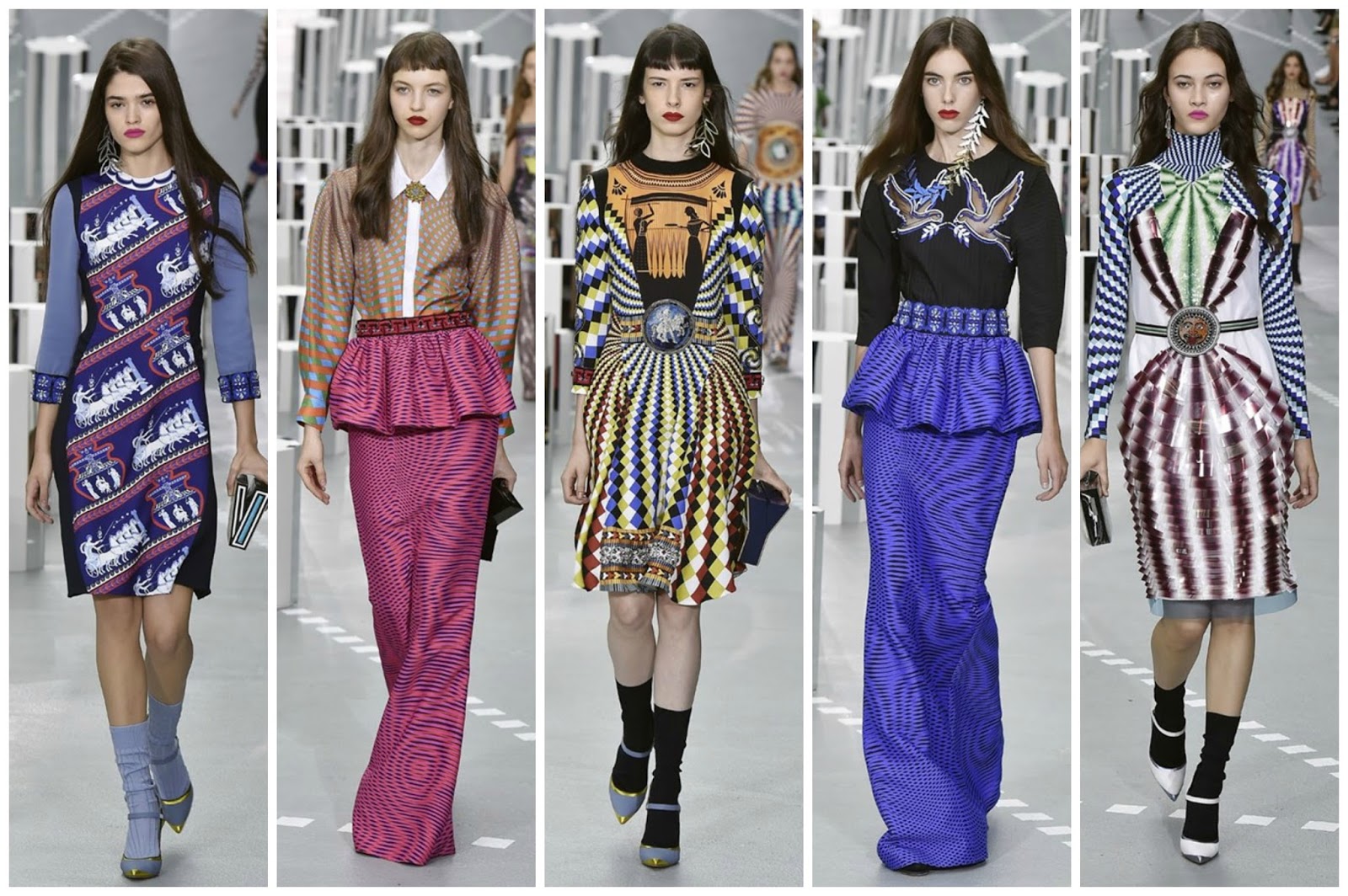 I’ve been smitten by Mary Katrantzou’s designs since I was lucky enough to attend her talk at the Apple store three years ago (wow how time flies!).

The show opened with a display of vibrant colours with fitted tunics over flared trousers covered in mosaic-esque squares, while Greek vase patterns and ancient battle scenes also featured. It’s not hard to spot the Ancient Greek inspiration. The Athens-born designer Katrantzou said she usually “shies away from personal themes”, but that this season, “ I wanted to do something with my roots. When I was younger I went to Knossos and I was so inspired by the colour.”

The alphabet clutches from the stunning collections which come in the 3D shapes of all 26 letters, will be the easiest way to update your wardrobe and add a Mary Katrantzou design into the mix. I did this with my Adidas x Mary Katrantzou trainers which I love. 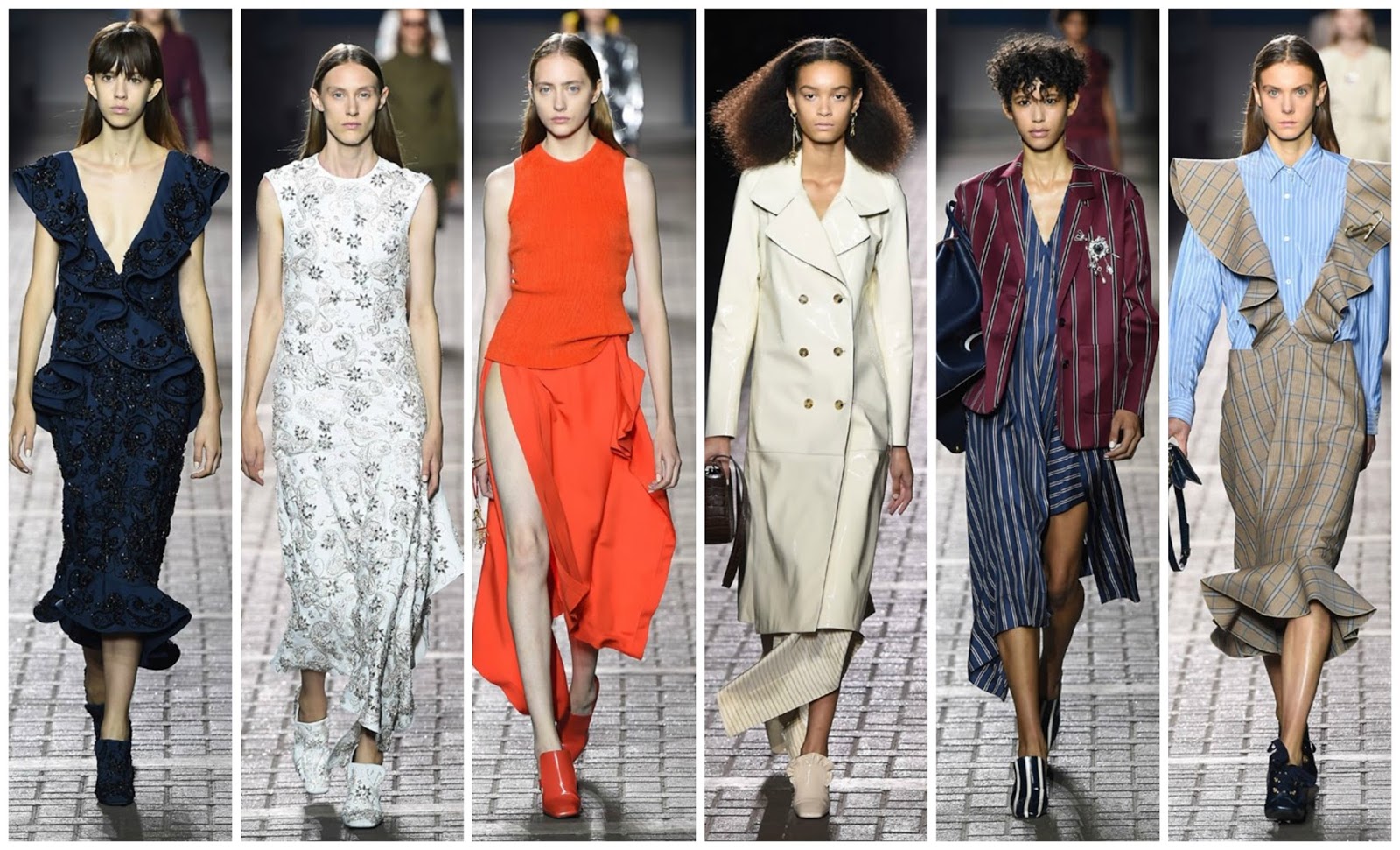 Anyone who knows me, knows I’ve been crushing on Mulberry since my very early 20s! To me Mulberry is the epitome of British design and I’ve been lucky enough to fulfil my ambition of having a Mulberry bag. The SS17 collection is Johnny Coca’s second one for Mulberry and he’s taken the striped blazer as inspiration to create a modern take on the uniform. Lots of boxy blazers worn with lose cut culottes made to look like skirts. The wools have been woven in England by a school supplier and the catwalk looks including mules gave a nod towards a decadent French revolutionary style which we’ll be seeing a lot of.

There were lots of silk ruffles and vibrant asymmetric velvet evening dresses and asymmetry will be another huge trend next season…..yay! Coca likes the trend as it “breaks the silhouette and looks more flattering.” I couldn’t agree more. 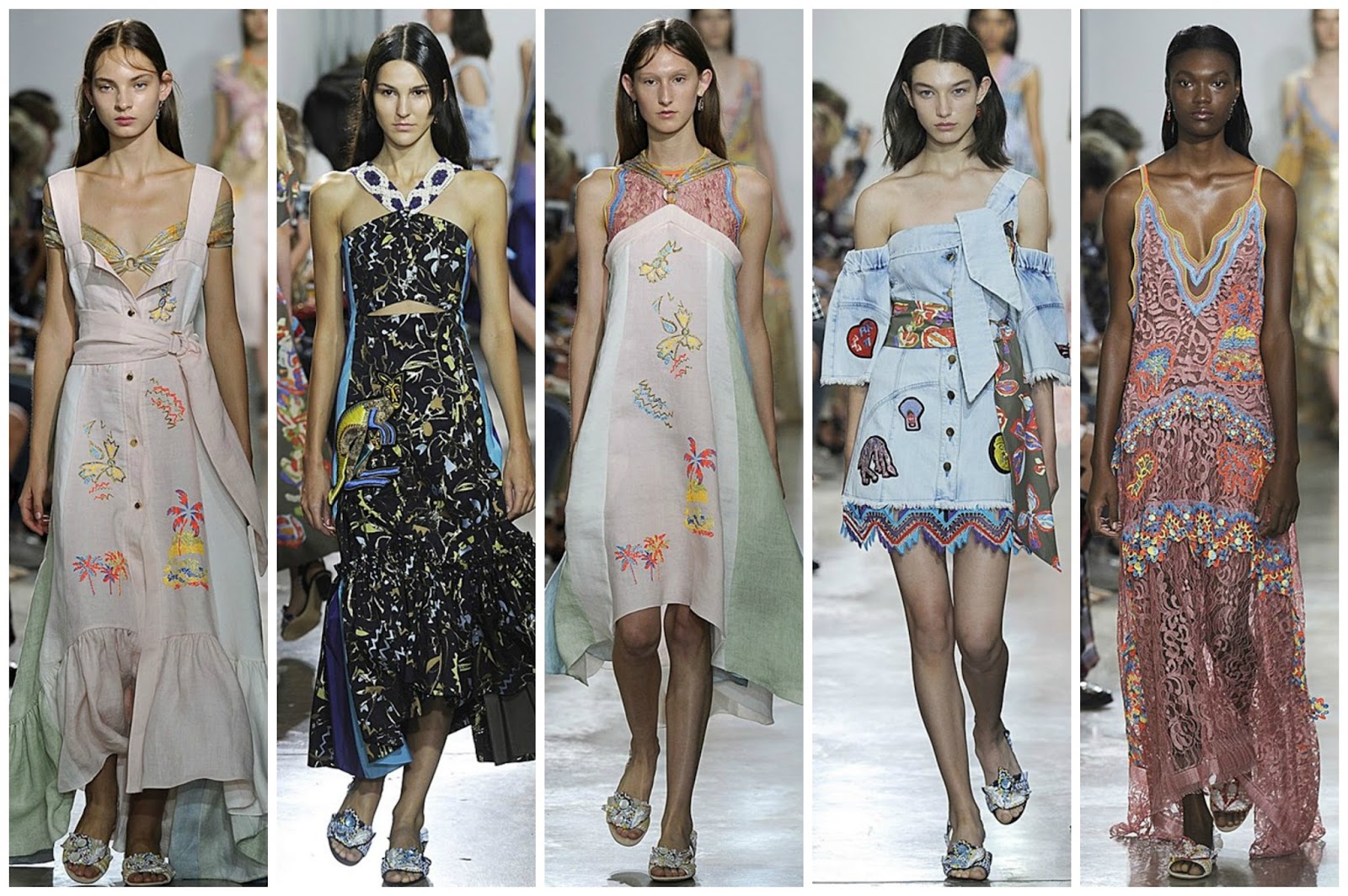 I’m a huge fan of Peter Pilotto designs and have am even lucky to have some the designs still featuring in my wardrobe from their Target collaboration. The design duo of Christopher de Vos and Peter Pilotto headlined their show as “Tropical Baroque” which conjured up visions of palm trees and exotic prints and the collection didn’t disappoint. The designs were floaty and fun and very wearable. Lots of exotic macramé necklets and also more casual pieces with crop tops and appliqué denim trousers mixed with gingham checks.

Boldly patterned floral dresses gave way to short tops with cartoon like stickers on denim. Bejewelled sliders and mules, gold gilding and even gold bras all made the ‘Baroque’ theme clear to see. 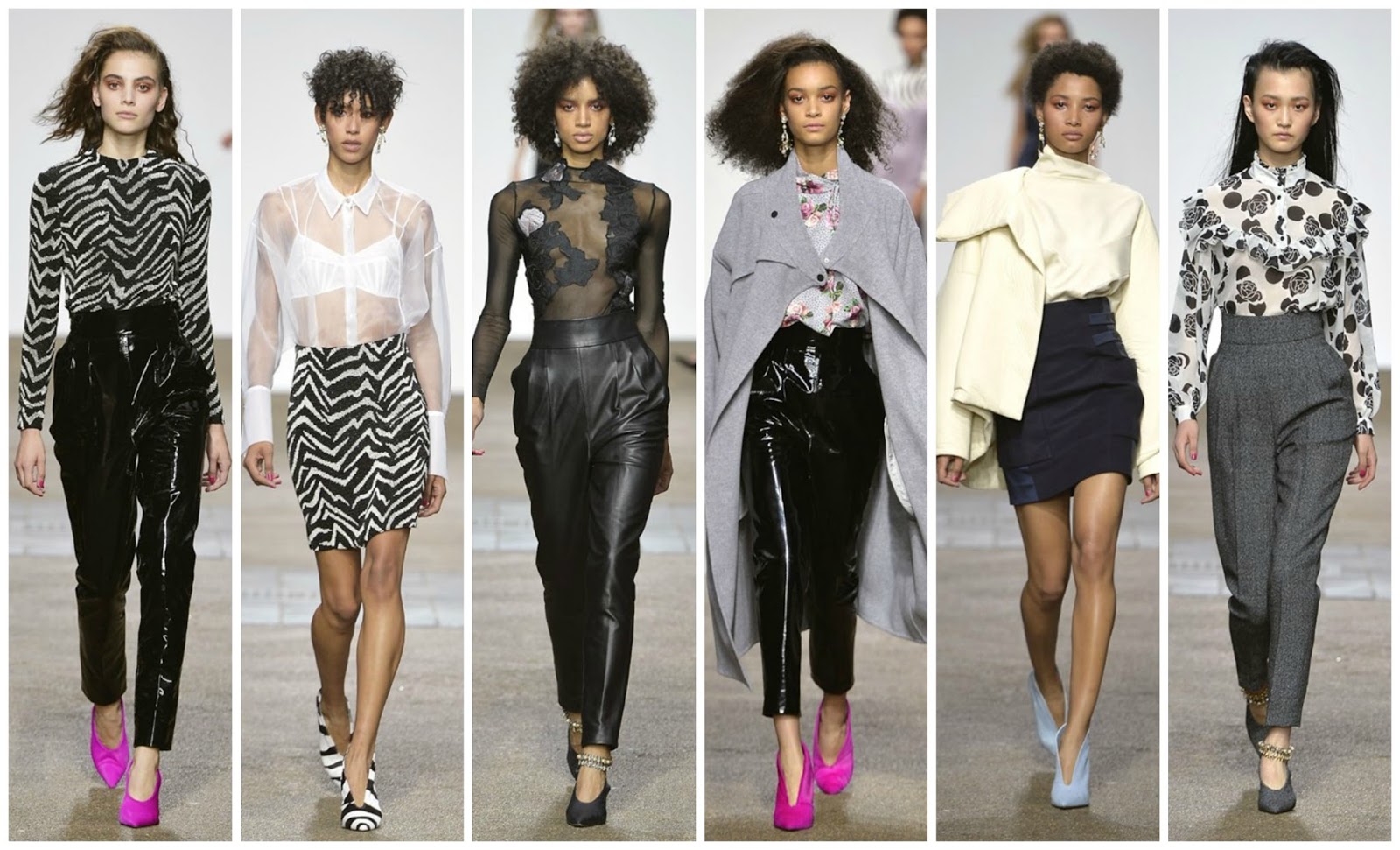 Topshop Unique is a collection that references great British style and heritage. Founded in 2001, the brand showcased at London Fashion Week schedule in 2005 and the are known for their energy, their catwalk models such as Cara Delevingne, Jourdan Dunn, and Lily Donaldson, and the use of iconic London show spaces such as Tate Britain, Tate Modern, the old Eurostar terminal at Waterloo and pop up tents in Regent’s Park. So when Topshop Unique’s creative director Kate Phelan states “Fashion is a playground“

For SS17, the high street retailer staged its show in the middle of Spitalfields Market in London’s east end. Phelan had been looking at the origins of British style. “We really wanted to celebrate it. London used to be full of fashion markets. We spent all our time [as kids] going to Kensington Market and Camden market,” she says. “You could pick up an army surplus jacket and you could pick up a cocktail dress.” As a child of the 80’s I definitely remember those days!

I loved the 80’s and 90’s vibe of the Topshop collection which took us back to oversized denim, 80s shoulder pads and 90s slip dresses. The greys, monochrome tones with contrasting brights and animal prints ticked all the boxes for me and oh man was their shoe game strong!

For the first time, Topshop’s premium line will be offered in a ready-to-buy way. This may be the best and possibly the most dangerous part of this collection as 60 per cent of the collection was available to purchase online immediately afterwards, hence dangerous for my bank balance! Topshop have stated “We’ve always been very responsive and part of being responsive in a digital climate is ensuring our customer has what she wants, when she wants it. Instagram has opened up the whole industry.” I’m already filling up my online basket! 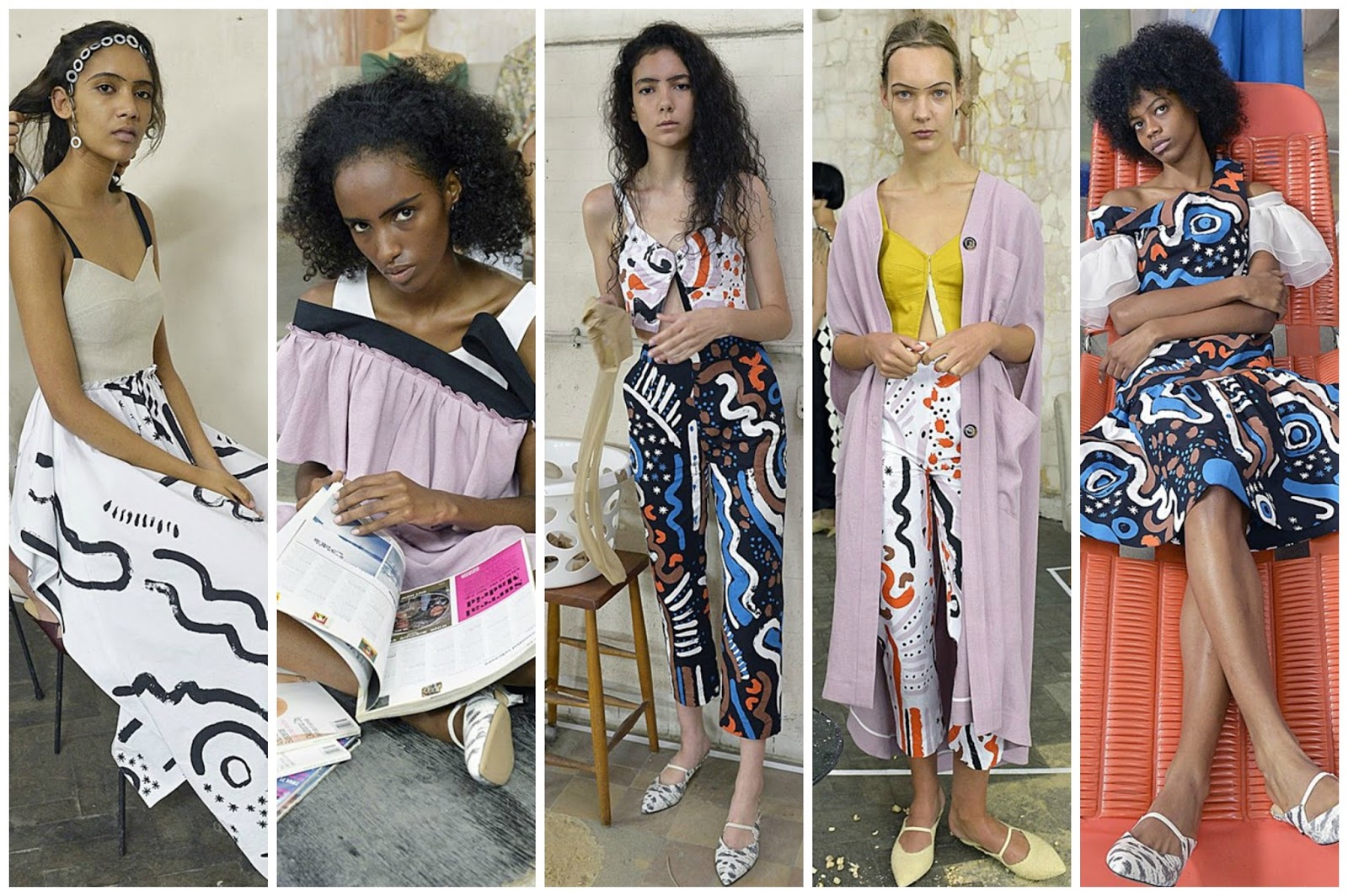 The Isa Arfen SS17 presentation took place on the top floor of the abandoned Old Truman Brewery in Shoreditch.  The floor was divided into squares using white tape and inside each square a different scene was being played out. Each scene is only a minute of movement which is then repeated like a short movie scene, it reminded me a little of immersive theatre.

The collection is quite classical with high-waisted peg leg trouser, figure hugging ballet-style bodies and long a-line skirts but with striking prints, however designer Serafina Sama has been inspired by a range of influences for this season’s prints, including the Omo Valley tribes and early 1960s portraits of Malian women.

Serafina has incorporated a number of decorative pieces in the collection which would make gorgeous statement pieces. There is real feature of animal prints as seen at Topshop Unique with bold prints so tribal look set to feature strongly with designers and the high street this coming spring. 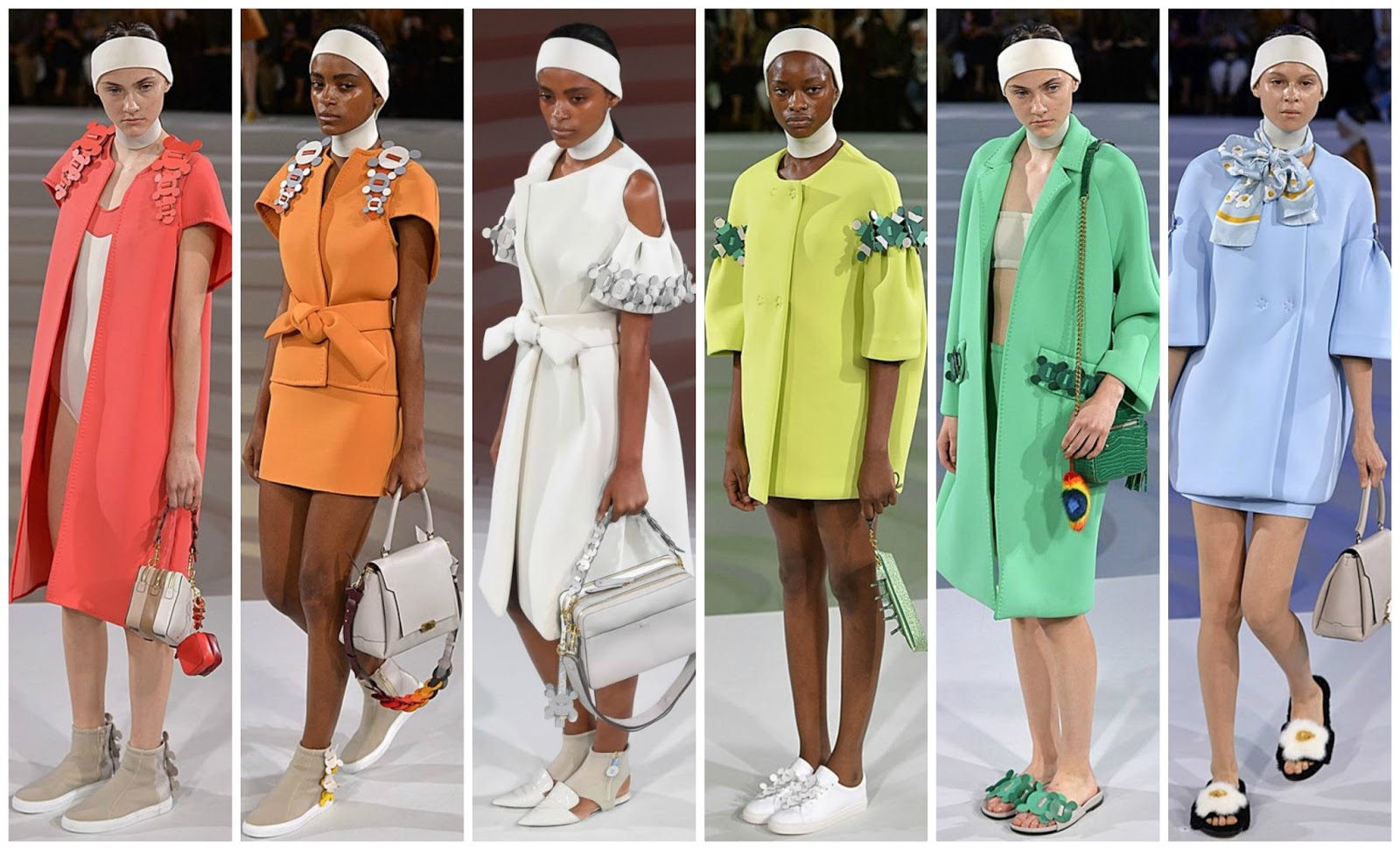 Anya Hindmarsh is the first accessories designer to hold an on-schedule London Fashion Week show, and the shows have become renowned for their creativity and humour. Recent shows included models floating weightlessly over the catwalk, a 120-strong male choir, a giant mirrored kaleidoscopic set and models walking within an artful Rubik’s cube, all sounds like a lot of fun.

To show off the handbags to the max, this year’s collection also features a collection of coats designed by Anya. Pastel popping shades of structured scuba neoprene just made the show so striking and I’m seriously crushing on the coats not just the bags this time.

This collection has seen a replacement of the the leather transfers, which have sold more than £14 million worth since their launch and have filtered down to the high street through the likes of Skinny Dip are now brazenly copied on the high street. This collection , features more intricate craftsmanship and a smorgasbord of sweetshop shades…..I want it all!

So there you have it, my roundup of my favourites from London Fashion Week. Plenty of inspiration there for next Spring and I’m already putting a mental shopping list together. Would have to hear what your LFW favourites have been.