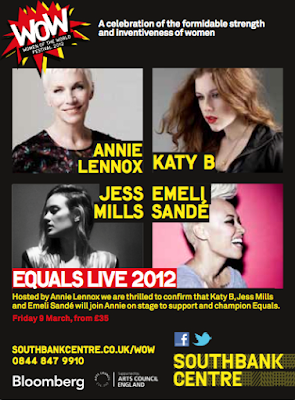 On Friday I went to the Equals Live: Women of the World Event at the Southbank Centre in London. The event which was hosted by Annie Lennox, was part of the London International Women’s Day – Women of the World celebrations and featured Emeli Sandé, Katy B and Jess Mills.

The event was incredible, Annie Lennox was really amazing and inspiring! Emeli Sande has such a fantastic voice and her live performances just blew us away! The evening wasn’t just about entertaining us – it was a celebration of women and our achievements, but it was also an evening which was thought provoking and humbling in equal measures.

We heard from organisations such as Women for Women who shared the harrowing experiences of marginalised women affected by war and conflict. Women for Women has been helping women survivors of war rebuild their lives and choose their own futures since 1993 and there was many a teary moment as we heard about the atrocities these women were subjected and how they have come through it and started to rebuild their lives. We also heard accounts from much closer to home as refugee organisations shared the shocking experiences of women at Yarls Wood – the immigration removal centre. One of the final presentations of the evening was the famous video from We Are Equals with Daniel Craig and Judi Dench highlighting the huge gaps in equality despite it being 2012!

I left the event feeling really moved by everything I’d heard and seen and on the way home I reflected on an argument I’d had with a male friend earlier that day. He’d informed me that International Women’s Day made him angry as women have it easy and we should stop pretending that they don’t! I, not so surprisingly had felt anger at his comments, but as I sat on the train home, I wished that I hadn’t got angry with him, but instead has insisted he come along with me to the event that evening. Perhaps like me, his eye would have been opened to how necessary this day is, how women around the world suffer due to their gender and just far we have yet to go to achieve real equality.